In order to stand firm in my faith, I must have God’s word in my mind and written on my heart.  Without His word I am as helpless as a little child standing at the edge of the ocean crying and afraid to move as his feet sink into the soft sand and the waves wash over his toes.

Have you ever been in a car accident or heard bad news and felt so frightened by it that your legs started shaking and you could hardly stand?  Jesus promises that He is faithful to help and support us when we cast our troubles on Him.  He promises to never let the righteous fall.

“The eyes of the LORD are on the righteous and His ears are attentive to their cry.”   Psalm 34:15

Righteousness is not just being good or doing good.  When God told Abraham,  “Look up at the heavens and count the stars if indeed you can count them.  So shall your offspring be.  Abram believed the LORD, and He credited it to him as righteousness.”      Genesis 15:5,6     Righteousness is believing God!

When we fix our eyes on Jesus we develop a trust that can not be shaken by the storms of life.  We are convinced that Jesus has our situation under control and we know that we can depend on this awesome and loving God as we walk though our difficulties with Him.  Thus even in the midst of a storm we will be completely at peace in His Presence. 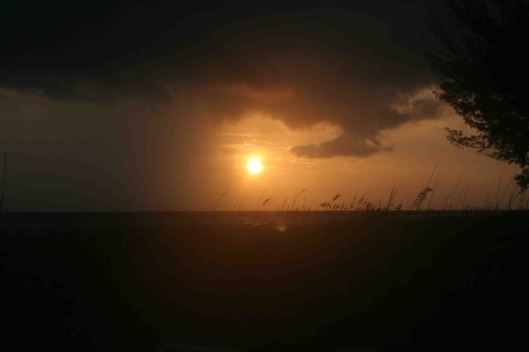 I would like to tell you about a young husband, the father of two small boys who has shown what I think of as Invincible Faith.  These are his own words and his faith in God will bless your heart.

The following was posted a few days ago following Jana’s move from the hospital to a rehab center where she is in the Disorders of Consciousness program.

“But why was he telling me this as we just got here?  So I asked him what he saw that made him say that.  He said it’s not what he saw, just all that she had been through.  Then I realized something:  He doesn’t know my wife or my God.”

“So I smiled a little and said, ‘I know where you are going, but you haven’t seen what I’ve seen.  You haven’t experienced the miracles that I have experienced.  So I tell you what, I won’t get too optimistic, and you allow yourself to be pleasantly surprised.’  He looked with a half smile and said okay.  I don’t think he had much faith in my faith.  I look forward to sharing with him God’s power over the next four weeks.”

“Jana seemed more alert today than I had seen her in the past two days.  I know the move was very stressful on her, but she kept her eyes open much longer in spite of that.  Her eyes were scanning the room more and not just staying in one place like they had been.  She even followed me with her eyes as I walked closer to her bed.”

“Jana is working every day with three therapists sometimes individually and sometimes as a group.  Today in therapy, we actually used her phone and I called her.  (The ringtone on Jana’s iPhone is a recording of her son’s infectious giggle.  It makes you smile every time you hear it.)  Jana seemed to lean her head towards the phone and “speak” many things.  Most of these were nonsensical and barely audible, but I didn’t care.  I didn’t care that she wasn’t answering me, or that her responses were not appropriate or that I could barely hear her, it mattered that she made the effort and that made my heart sing.  I have never looked more forward to the mundane task of talking to my wife on the phone as I do right now.  I will never take it for granted again.”

Jana is the beloved teacher of two of our grandchildren and is a dear and much loved friend of their entire family.  Please pray for her and her family.  Prayer is powerful and God is still in the business of working miracles everyday.