“His pleasure is not in the strength of the horse, nor his delight in the legs of a man; the LORD delights in those who fear him, who put their hope in his unfailing love.”  Psalm 147:10,11

Springtime in Kentucky brings thoughts of beauty, Red-buds and Dogwoods in

bloom, tulips and daffodils, and the woods filled with wildflowers.  Basketball and ‘March Madness,’ take priority over all other sports and events at this time of year.  And just in case you haven’t heard, our fantastic Lexington team the Kentucky Wildcats won the NCAA Division 1 basketball championship this year, YEA WILDCATS!

When April arrives and the new foals are put out to pasture many a Kentucky heart turns to racing horses.  Lexington, 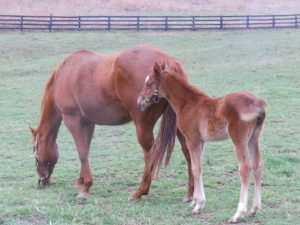 Kentucky has been named the Horse Capital of the World.  Kentucky is the leader in the United States in the dollar value of its horses.  They have $1.75 billion worth of horses and other equines that are bought and sold each year.  The Kentucky Horse Park has visitors from around the globe come to the many international events that are held there every year.  In 2010 the Alltech FEI World Equestrian Games were hosted by the Kentucky Horse Park.  This was the first time the games had ever been held outside of Europe.

This year, for the first time I went to Keeneland.  The Keeneland Racetrack is a

tracks.  The annual horse sales at Keeneland are also world-renowned and literally attract the “crowned heads of Europe.”  I had heard for years what a beautiful place it was and I was not disappointed.  The day that we went was one of those perfect spring days with blue sky and white puffy clouds and temperature in the 70s.  If we had arrived early in the morning we could have attended the popular breakfast with the Works, a Southern style breakfast buffet that is held during the jockeys early morning workouts.

Equestrian  Restaurant at the clubhouse and enjoy a cup of their delicious Kentucky Burgoo  out on the patio.  I was surprised that everyone at the other tables hardly seemed to taste their meal or notice what a beautiful day it was because they all had their noses buried in their racing forms.  I for one, loved every moment of the day and I especially enjoyed watching the parade of fashions that hurried past us on their way to the betting windows.

Put the beef, soup bone, lamb, chicken, water, salt, pepper, and red pepper in a heavy pot with a tight-fitting lid.  Bring to a boil then simmer, covered for two hours.  Remove the chicken skin and bones and cut meat into bite-size pieces.  Return meat to pot.  Add potatoes, onions, lima beans, carrots, green peppers and corn.  Simmer two hours.  Mixture will be thick but should not stick.  Add water sparingly, if necessary.  Add okra, tomatoes, and garlic and simmer 1 1/2 hours longer.  Add parsley and remove from stove.  This soup will keep in refrigerator for a long time.  The flavor improves with standing.  Makes 10 servings.

to a parade of horses that would be running in the first race.  I was amazed by the size and beauty of each horse up close.  A couple of them were so anxious to run that it took two handlers to hold them.  This was followed by getting to watch the jockeys mount their horses and head for the gate.  Following that we got caught up in the crowd hurrying to watch the first race.  We found a place at the rail and I 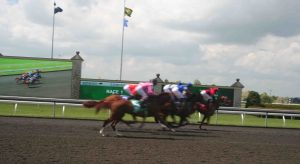 loved feeling the excitement and hearing the crowd roar as the horses came pounding down the final stretch nearing the finish line.  I am afraid if I were to pick a winner it would be for all the wrong reasons so it is a very good thing I don’t place my hope in a horse and gamble. 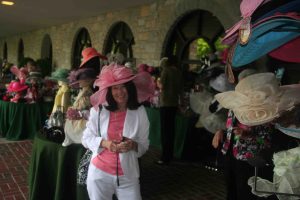 beautiful shops.  However when I discovered that the cost was $70 dollars, I decided I could do just as well without it especially since I had no plans to go to the Derby this year.  Instead I decided to do a girly project with my granddaughters at the next cousin’s night and make Derby hats.

This was one of the most fun projects we’ve ever done and the large brim straw hats cost only $3.99 at Michael’s Crafts store. 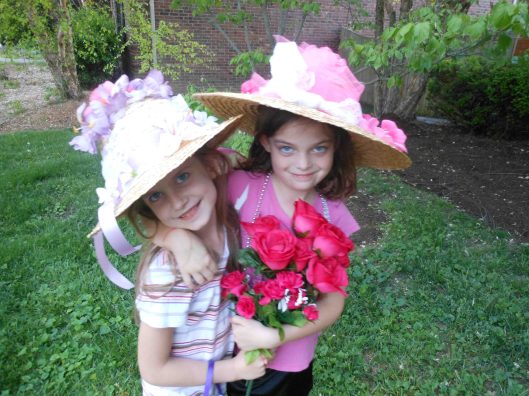 decorate the hats.  We hot glued and stapled the flowers, ribbons and lace on each hat and then took pictures of each winner wearing her hat and holding a bouquet of red roses.

Pie.)  This is definitely a man pleaser, but I think you gals will love it too.  This recipe also came from my Bluegrass Winners cookbook.

If you go to Keeneland you may want to try the buffet in the Kentucky Room.  It sounds wonderful and if I go back next year, I am going to try it.  If I had only known sooner it would have been near the top of my list for must dos at Keeneland.  On the buffet is Carved Roast Top Round of Beef, Au Jus, Roasted Turkey, Baked Ham, Pasta Marinara, Fresh Vegetable Du Jour, Potatoes, a variety of Fresh Homemade Salads, Bakery Rolls, New York Cheesecake and Pecan Pie.  Makes me hungry just thinking about it.

And the prize we will receive at the end of life will be even far greater than an arm full of roses!

“I press on toward the goal to win the prize for which God has called me heavenward in Christ Jesus.”  Philippians 3:14