“For I know the plans I have for you,” declares the LORD, “plans to prosper you and not to harm you, plans to give you hope and a future.”  Jeremiah 29:11

his family estate in Britain, he probably was angry with God blaming him for what had happened.  He was taken to Ireland and remained a prisoner for 6 years serving his captors as a lonely shepherd with only sheep for companionship.  But like David, he had a lot of time to talk to God and probably voiced not only his complaints but also his fears and dreams.  He finally escaped by walking 200 miles to the Irish coast and returned to Britain.  Once in Britain he began religious training and became a priest.  His dream was to

return to Ireland and convert the pagans to Christianity.

He used the lovely shamrock leaf to explain the Trinity; God the Father, Son and Holy Spirit three in one.  He became the Patron St. of Ireland and St. Patrick’s Day is celebrated on March 17 which is the anniversary of his death.

When I was growing up anyone who did not have on something green on St. Patrick’s Day got pinched.  I didn’t have any green outfits and I remember

how grateful I was that my sister Judy had crocheted me a green shamrock pin to wear so I wouldn’t be pinched.

I’m still searching for rainbows and I imagine Ireland has lots of them.  It is known as the Emerald Isle because of the abundance of rain and beautiful green grass.  Kentucky also has abundant rain and it is known as the Blue Grass State.  I guess the grass sometimes looks blue in the misty atmosphere after a rain.  This is a picture of some of our puppies who are a bit muddy after playing in the rain. 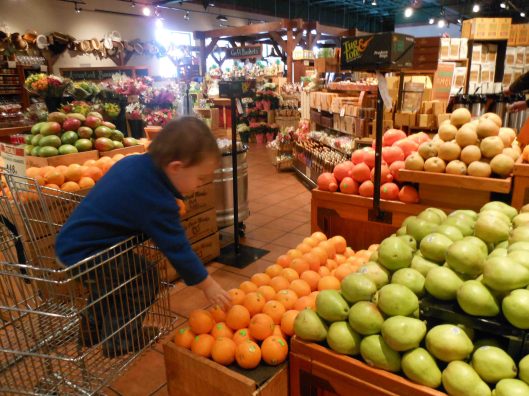 It is still too cold for the farmer’s market to open so we decided to take a visit to a beautiful Fresh Market store.  The fruit and vegetables were placed in rainbow assortments and it all looked so yummy it was hard to resist.  It was a great learning experience for Shepherd.  He wanted to know about everything and seemed determined to load up the grocery cart with all he could get his hands on.

When I returned home I made a fruit tray using some of the pineapple, cantaloupe, Honey Dew melon, strawberries, raspberries, Kiwi, grapes and blueberries.  I believe it had all the colors of the rainbow which I learned long ago to remember with the letters  ROY G BIV (Red, Orange, Yellow, Green, Blue, Indigo and Violet. 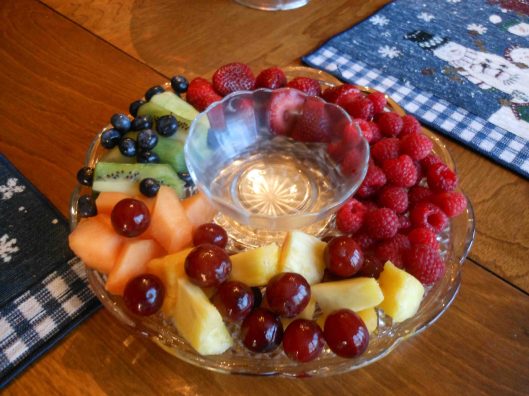 Stir all together and serve with fruit.

It is a myth that St. Patrick got rid of all the snakes in Ireland.  It is more likely that he rid Ireland of a lot of the evil attitudes which some might attribute to Satan who was disguised as a snake in the garden of Eden.  A young teenager had all his life plans altered and what seemed like a terrible tragedy, God turned for the good not only for the boy but for an entire country.  Happy St. Patrick’s Day to you!